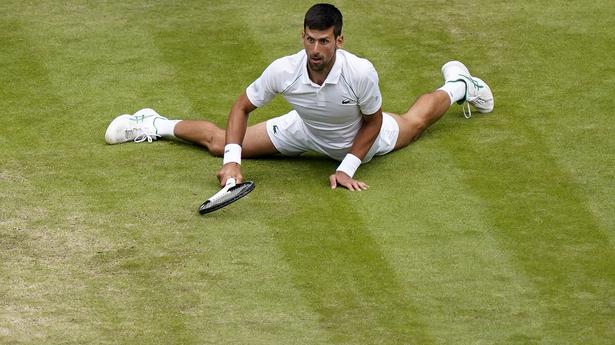 It says a lot about Novak Djokovic that a two-sets-to-none hole at Wimbledon on a day he was hardly at his best likely left no one thinking the ultimate outcome was a forgone conclusion.

A lot about his pre-eminence at the All England Club in recent years. A lot about his history of overcoming that sort of deficit. A lot about his ability to adjust, to adapt, to right himself quickly. A lot about what might happen if — or, rather, when — he got back into the match and it eventually went to a fifth set.

And so it was that Djokovic spotted 10th-seeded Jannik Sinner of Italy that huge lead on Tuesday, then worked his way all the way back to pull away and win 5-7, 2-6, 6-3, 6-2, 6-2 at Centre Court, earning an 11th semifinal berth at Wimbledon with his 26th consecutive victory at the grass-court Grand Slam tournament.

Djokovic collected his seventh career comeback in a match he trailed by two sets — he last did it in the French Open final against Stefanos Tsitsipas last year — and improved to 37-10 in five-setters. That includes a 10-1 mark in matches that go the distance at Wimbledon, including nine straight victories; the lone loss came way back in 2006.

In the semifinals on Friday, the top-seeded Djokovic, a 35-year-old from Serbia, will meet either No. 9 Cameron Norrie of Britain or unseeded David Goffin of Belgium. The men’s quarterfinals Wednesday: No. 2 Rafael Nadal of Spain vs. No. 11 Taylor Fritz of the U.S., and Nick Kyrgios of Australia vs. Cristian Garin of Cile.

The first player into the women’s semifinals was 103rd-ranked Tatjana Maria, who defeated Jule Niemeier 4-6, 6-2, 7-5 in an all-German matchup. Maria is 34, making her only the sixth woman at least that old to get this far at Wimbledon in the professional era, which began in 1968.

This is Maria’s 35th Grand Slam tournament; she only once previously had even made it as far as the third round.

She’ll take on No. 3 Ons Jabeur of Tunisia or Marie Bouzkova of the Czech Republic for a spot in Saturday’s final. The other women’s quarterfinals: 2019 champion Simona Halep of Romania vs. No. 20 Amanda Anisimova of the U.S., and No. 17 Elena Rybakina of Kazakhstan vs. Ajla Tomljanovic of Australia.

Of the women’s quarterfinalists, only Halep owns a major title (she has two).

‘I was Getting Numb, Dhoni Told Me…’: Harbhajan Singh Shares Interesting Strory from India vs Pakistan 2011 WC tie

‘When PM Modi Speaks With Us, It Feels Like..’: Harmanpreet Kaur Shares Her Emotions After Meeting the Indian Prime Minister

Sreeja on her tears and the CWG high

Manchester United’s game plan went ‘in the bin’ during 4-0 defeat, according to manager Erik ten Hag