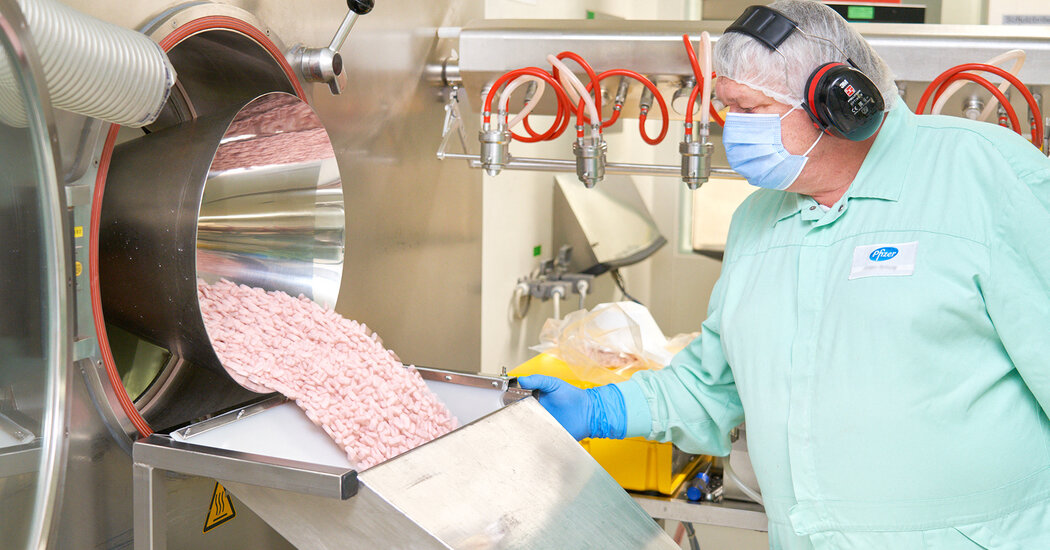 LONDON — Britain surpassed 100,000 new coronavirus cases on Wednesday for the first time since the start of the pandemic, as the England’s government announced an easing of isolation restrictions.

The new toll of 106,122 new infections — the highest ever — comes as the highly transmissible Omicron variant continues to surge across the country. The uptick is a 50 percent increase over the past week, according to government data.

A surge in coronavirus cases has winnowed the staffs of hospitals, clinics, rail services, fire departments and ambulance services across England, where most pandemic restrictions have been lifted since the summer. Before the new case numbers were released on Wednesday, England’s announced that it was reducing the number of days that people are required to isolate for after showing Covid-19 symptoms to seven days from 10 days — a change that officials said was based on updated guidance from health experts, and that could help alleviate the staffing shortages.

Sajid Javid, the health secretary, said the move was based on guidance from the government’s Health Security Agencys that a weeklong isolation period along with two negative test results had “nearly the same protective effect as a 10-day isolation period.”

Prime Minister Boris Johnson has resisted adding new restrictions before Christmas, although he has said that he “would not hesitate to act” after the holiday if needed.

People in England will be allowed to end their quarantines if they can produce negative tests on days six and seven. That creates a more lenient policy than in the United States, where people can end their isolation periods 10 days after showing symptoms if they have not had a fever for 24 hours and if their other Covid-19 symptoms are improving.

“This new guidance will help break chains of transmission and minimize the impact on lives and livelihoods,” Dr. Jenny Harries, the chief executive of the government’s Health Security Agency, said in a statement. She emphasized that people must continue to follow public health advice.

People who are not fully vaccinated are still required to isolate for 10 days if they come into contact with an infected person.

Elsewhere in Europe, governments have been divided in their responses to widening outbreaks of the Omicron variant.

The Netherlands has closed nonessential shops, bars, restaurants, gyms, outdoor sports, cultural venues and schools. Sweden said this week that it was adding new restrictions on gatherings, and Finland is instructing restaurants to close early starting on Friday.

Other countries have held off introducing further restrictions before Christmas. New rules in Germany will come into effect on Tuesday, and in Portugal, nightclubs and bars will close from midnight on Saturday for at least two weeks.

In France, proof of vaccination is required for entry into bars and restaurants. The government has said it does not plan to add further restrictions. Health Minister Olivier Véran said on Wednesday that the focus was on the speedy rollout of booster shots.

In Britain, Scotland and Wales are adding restrictions starting on Sunday. Prime Minister Boris Johnson has not ruled out further restrictions in England, where a wave of infections is putting severe pressure on the National Health Service, which was already under strain from worker shortages caused by funding cuts, Brexit and the exhaustion from nearly two years of facing the pandemic.

Britain is not experiencing the kind of dire shortage of beds that hospitals faced during earlier peaks of the pandemic, but the pressure on the system caused by staff illnesses is evident across the country.

Data projections from the Health Service Journal, a trade publication, indicated that one in three workers in the National Health Service could be absent from work by New Year’s Eve if the current case rate continues.

Although some evidence suggests that the Omicron variant may produce less severe symptoms than Delta, it also appears to be up to twice as transmissible.

A Boom, a Fire and a Stampede: Dozens Die at a Coptic Church in Egypt

The U.S. Wants to Close Guantánamo. Could a Saudi Center Provide a Way Out?