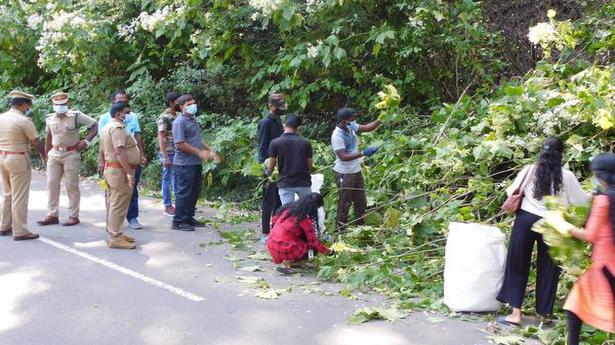 In a novel initiative, the Forest Department has roped in college students from Coimbatore to assist in clearing an invasive alien species that has covered large portions of forest areas in Valparai and Manombolly forest ranges within the Anamalai Tiger Reserve (ATR) in Coimbatore district.

Manambolly Forest Range Officer A. Manikandan said that around 100 students from two private colleges participated in the drive held to clear the invasive species Montanoa hibiscifolia at Waterfall Estate area in Valparai on Saturday. Around one tonne of its flowers and seeds were cleared on Saturday.

“The growth of Montanoa hibiscifolia affects the growth of the trees and plants in the locality. This could lead to a shortage of food for herbivores and also could cause the disruption of food chain of the wild animals in their natural environment,” he said.

Deputy Field Director (Pollachi) of ATR M.G. Ganesan, who led this initiative, told The Hindu on Sunday that the college students and the forest staff targeted the removal of the flowers alone as removal of the whole plant could prove to be a difficult task, given the extent of its spread. The process was done in a “scientific manner” and the flowers and seeds of Montanoa hibiscifolia that weighed around one tonne were incinerated to prevent further spreading of the invasive alien species, he said.

What was seen in small patches in Valparai region in the year 2012 has now managed to spread to two forest ranges, Mr. Ganesan said. As Montanoa hibiscifolia does not allow the growth of other plants and trees through its extensive spread and elephants do not eat this invasive species, it could drive the tuskers towards human habitations in search of food and possibly cause an increase in human-animal conflicts, he noted.

“We thought that it would not be possible to clear this invasive weed species only with our 100-odd staff members of Forest Department, hence we approached the two colleges,” he said. The college students who participate in this drive will be given certificates by the Forest Department. However, a substantial removal of this invasive weed species in Valparai and Manombolly ranges would require at least three weeks of sustained efforts, Mr. Ganesan said. “The flowers have started spreading in the downward slope of the hills towards Aliyar Dam through wind pollination,” he said.

The Forest Department will seek the assistance of conservationists, non-governmental organisations and educational institutions for human resources and material support to scale-up this initiative and curb the spread of this invasive species, he noted. Those interested to help the department can reach out to the ATR by contacting 88832 26662 and 98425 95826.