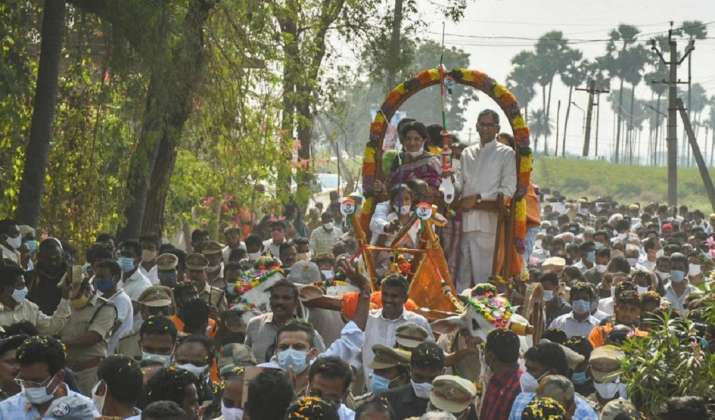 Chief Justice of India Justice N.V. Ramana took a bullock cart ride during his visit to native village Ponnavaram in Krishna district of Andhra Pradesh. On his first visit to the village after assuming office of the CJI in April this year, he along with his wife took bullock cart ride to reach the village from the outskirts.

The CJI, who received a grand welcome from the villagers and the district administration, offered prayers at the local temple.

As soon as the CJI’s convoy reached the borders of the village, people gathered there offered a traditional welcome. Justice Ramana and his wife were then guided to a specially decorated bullock cart which took them to the village.

A festive atmosphere prevailed in the village and for many it was early Sankranti. Folk artists were seen playing traditional musical instruments and performing folk dances as part of the celebrations.

The villagers were elated to see the son of soil in their midst after reaching the top most position in the judiciary. They arranged a civic reception in his honour.

Earlier, district collector, superintendent of police and other officials, public representatives and leaders of various political parties accorded the CJI warm welcome when he reached Garikapadu checkpost to enter the district.

Justice Ramana will spend four hours in the village before returning to Vijayawada. He is scheduled to visit Kanaka Durga temple on Saturday morning. He will attend a High Tea being hosted by the state government the same evening.

A civic reception will also be organised in Vijayawada. Rotary Club of Vijayawada will felicitate him and present him with the Lifetime Achievement Award.

India is the mother of all democracies, Modi says at U.N....