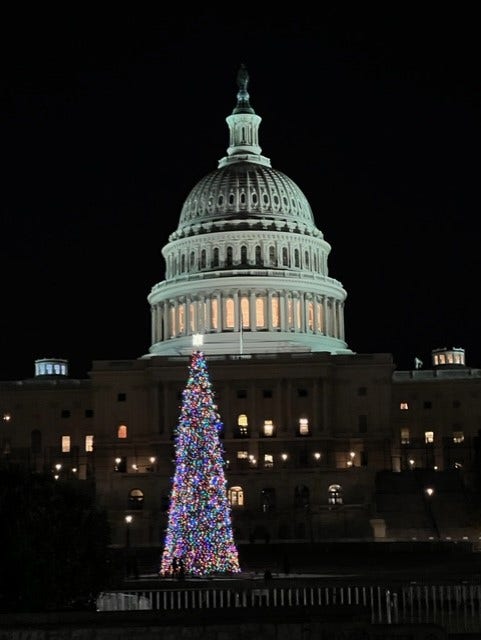 There is little joy at the U.S. Capitol this holiday season. The COVID-19 testing center on the lower level of the Capitol Visitor’s Center attests to that. A line of congressional aides stands dozens deep at any one time, snaking around polished floors and a spiral staircase. It serves as a reminder that Christmas could be pretty grim as omicron grips the nation — on Capitol Hill or anywhere else.

This isn’t a rarity at any testing site around the country these days. The U.S. Capitol — in all its manifestations — simply mirrors the rest of American society.

Mask-wearing seemed slightly lax at the Capitol of late. But now masks dramatically reappeared among those who work here. Christmas at the Capitol has always been dismal. In recent years, Congress has toiled through the holidays — often addressing some of the most consequential subjects facing the nation: Impeachment, a lengthy government shutdown, a transformational tax bill, Obamacare, the fiscal cliff, a defense bill. Such holiday sessions have almost become the norm, ruining Christmas and New Year’s for many who work at the Capitol. After all, this is Capitol Hill. It ain’t Santa Claus, Ind., or North Pole, Alaska.

Most thought Congress would meet through the holidays this year as Democrats attempted to pass the social spending bill. There were flirtations with a government shutdown and the debt limit. But that was all put to bed last week — despite the internecine warfare now between some liberal Democrats and Sen. Joe Manchin, D-W.Va.

The recent COVID-19 surge simply reminded everyone that even if Democrats were close to having the bill text together and were within range of securing the votes of Manchin and Sen. Kyrsten Sinema, D-Ariz., they probably couldn’t have approved the bill before Christmas anyway. Sens. Elizabeth Warren, D-Mass., and Cory Booker, D-N.J., tested positive. There’s no remote voting in the Senate — unlike the House. That means Democrats lacked the votes to approve Build Back Better — even if things were ready to go.

There aren’t a lot of Christmas traditions on Capitol Hill. A handful of offices decorate informally with wreaths and lights. Some even wrap their doors like a package. The scent of gingerbread wafts through the House side of the Capitol with a cookie replica of the Capitol near the Memorial Door.

The Capitol kitchen staff ditched the practice last year because of the pandemic. But the five-foot, confectionary Capitol returned this year. Roll Call even reported that the Statue of Freedom perched atop the cookie dome broke off.

The non-edible Capitol is decorated with sugar, icing and candy. It’s baked in the Longworth and Cannon House Office Buildings and wheeled over to the House side of the Capitol. But few have seen this year’s rendition. Officials haven’t permitted formal tours in the building since March of last year.

More staff are back. But it’s scattered. Some still toil from home when it’s not absolutely essential that they venture to the Capitol. Others just roll in when needed. The same with lawmakers. Lobbyists are scarce.

When the House and Senate aren’t in session, the Capitol looms as a cavernous, marble tomb this deep into the pandemic. Especially at Christmas. Otherwise, it would bustle.

“This is the People’s House,” wrote Comer. “But the American people are not allowed to enter.”

The Capitol building in Washington, D.C. decorated for the holiday season.

The pandemic has yet to sidetrack one holiday custom on Capitol Hill: the Capitol Christmas tree. Some 15,000 lights illuminate the 84-foot tall white fir nicknamed “Sugar Bear” on the West Front of the Capitol. The tree is from the Six Rivers National Forest in California. Few panoramas are as striking in Washington, D.C. than the glowing Christmas tree, pitched against the Capitol dome as a backdrop.

It doesn’t matter if it’s cold or warm, rain or snow. There are always visitors to the Capitol Christmas tree at night. People park their cars nearby and haul bundled-up kids in parkas and hats up to the tree for a snapshot. It’s quintessential Washington.

All that’s lacking is snowfall. But there is one holiday tradition that is a curious, oft-awaited mainstay. Almost anyone who has been around the House side of the Capitol for any period of time near the holidays knows what I’m writing about.

Every year, as the holiday season descends on Washington, a beautiful mural emerges in an obscure, basement hallway of the Capitol. “Merry Christmas,” declares the long, wooden mural in evergreen paint and an Olde English font. “And a very happy New Year.”

A trio of white, painted candles burn on the lower left of the mural, nestled in bunting and mistletoe. Five, brightly-colored, festive orbs adorn sprouts on the greenery. The right-hand side of the mural is breathtaking.

It is visually what you frame in your mind every time you hear Nat King Cole croon “The Christmas Song” or “White Christmas” by Bing Crosby. The diorama features a moonlit snow scene. You can imagine the snow as hard and crisp, reflecting the moonbeams. A row of four, snow-dusted evergreens is pitched against an old wooden fence. Four wooden buildings are set in the distance, each rooftop glazed with snow. And, if you look closely, in scarlet paint, along one of the splintery beams on the fence line, a surname appears: “Seraphin.”

Every year a beautiful mural emerges in an obscure, basement hallway of the Capitol. “Merry Christmas,” declares the long, wooden mural in evergreen paint and an Olde English font. “And a very happy New Year.”

I have observed that this spirited Christmas mural would appear in that basement hallway of the Capitol right after Thanksgiving. It would then disappear around Jan. 2 or 3. Everyone would take notice.

Nearly everyone on Capitol Hill knows about the mural. But no one knew the backstory. Multiple calls and requests to the House Curator’s Office weren’t returned. The same with the Architect of the Capitol’s Office. Calls went out to former top congressional aides. No one knew the origin of the sign. Even a former House officer reached out to yours truly, unsolicited, to ask if I knew the mural’s history.

In the Capitol building a beautiful mural emerges in an obscure, basement hallway of the Capitol. “Merry Christmas,” declares the long, wooden mural in evergreen paint and an Olde English font. “And a very happy New Year.”

No one knew how long the mural has hung in the Capitol or when it was painted. The font and style looked like something from the late 1940s or 1950s.

One longtime congressional aide linked the mural to a kind of time machine. It transported her to another era. The aide said she could see herself at a Christmas party after World War II, sipping a retro cocktail like a Dubonnet. She’d be dressed in a getup from the era — complete with stockings accented with a thin line up the back.

Well, it turns out the sign isn’t as old as the 1940s. But it has hung in the Capitol basement at Christmas for decades.

Architect of the Capitol Paint Shop Supervisor Joseph Seraphin was something of a legend on Capitol Hill. He painted a mural on a wall of an office now used to distribute flags that fly atop the Capitol. That painting depicts Black Jack. That’s the coal black Quarter Horse that pulled President Kennedy’s caisson to the Capitol when he laid in state.

Seraphin painted the Christmas mural in 1973. Capitol workers bring it out every holiday season and hang it in that otherwise drab corridor.

Even people who work at the Capitol may not be able to reel off the names of the eight paintings in the Capitol Rotunda. The Landing of Columbus. The Embarkation of Pilgrims. The Declaration of Independence.

But almost everyone knows Seraphin’s Christmas mural in the basement. Seraphin worked for the Architect of the Capitol until 1985 and died in 2002. The mural is a curious tradition. Certainly one of the most beloved on Capitol Hill at the holidays.

And although the Capitol can be a pretty dreadful place at the holidays, Seraphin’s holiday tableau has shifted a generation of congressional aides, staffers and lawmakers themselves back to another era. Glasses are clinking with champagne. Glenn Miller is playing on the radio. It’s Christmastime. And all is calm. All is bright.