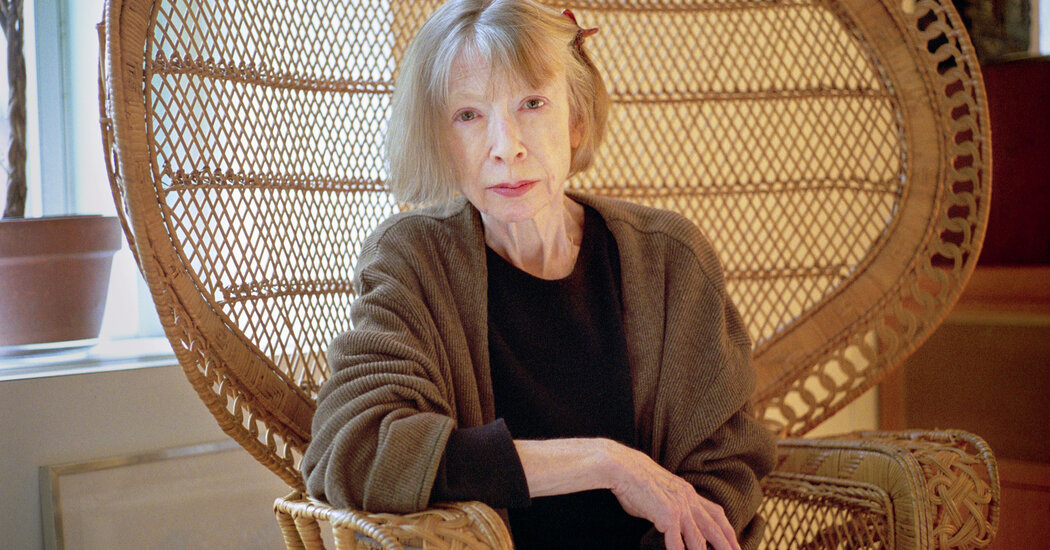 Shortly after Joan Didion’s death late last week, Gov. Gavin Newsom proclaimed that she had been “the best living writer in California.”

A fifth-generation Californian, Didion was raised in Sacramento, earned an English degree at U.C. Berkeley and lived for years in Los Angeles. Her career took off in New York, but it was her keen observations of her home state that often struck a chord with readers.

“All that is constant about the California of my childhood is the rate at which it disappears,” Didion wrote in “Slouching Towards Bethlehem,” her 1968 collection of essays. “California is a place in which a boom mentality and a sense of Chekhovian loss meet in uneasy suspension.”

After Didion’s death, New York Times readers shared how her 60-year career affected their understanding of their own lives and the world around them. Here are some remembrances from fellow Californians:

“I first read Joan Didion as a teenager growing up in California in the ’70s. Until then, I felt alienated from the world. I hadn’t met or read anyone who thought like I did, felt like I did, looked at life and the world like I did. She helped me realize I wasn’t freakish or crazy, that my point of view was grounded in truth and reality, that I belonged in this world.” — Glenn M., Sacramento

“Joan showed us how beautiful writing can be. Her clear, resonating prose touched our hearts and left us breathless.” — Lisa K., San Jose

“In my history courses I always assigned Didion’s memoir ‘Where I Was From.’ Didion writes about the gap between what Californians want to think of themselves and what they in fact are:

‘I was born in Sacramento, and lived in California most of my life. I learned to swim in the Sacramento and the American, before the dams. I learned to drive on the levees up and downriver from Sacramento. Yet California has remained in some way impenetrable to me, a wearying enigma, as it has to many of us who are from there. We worry it, correct and revise it, try and fail to define our relationship to it and its relationship to the rest of the country.’

Thank you for your revisions and corrections, Ms. Didion. They instruct and inspire.” — Monica A., Los Angeles

“Joan Didion really captured a certain slice of Southern California, with its promise and ennui, its freeways and haze and haunted places, just past all the Hollywood glitter.

She forever linked the land, the psyche and the times in very personal ways that spoke to me and continue to influence me, almost 50 years later. Joan Didion was California Journalism Royalty. RIP.” — Suz L., Mill Valley

“She captured my experiences as a bicoastal Californian perfectly. Love, loss, adventure, fire, screaming down the coast highway to San Francisco. Finally aging and anticipation of death around the corner. My husband is 71. ‘The Year of Magical Thinking’ undid me. I treasure every waking moment.” — Patricia G., Los Angeles

“She altered my worldview, my sense of self, my appreciation of women writers, and writing structure and style. I have read every published work she wrote — starting when I was a young teenager.

Waking on a rainy day, I read that she has passed, but there’s a new star in the sky.” — Michelle L., San Francisco

If you read one story, make it this

Despite rising hospitalizations, Omicron is not more threatening for children.

“Its wide open spaces means that you can have a leisurely hike alongside bikers (no e-bikes allowed), small birds, hawks and, depending on the time of day, deer. I have yet to encounter a mountain lion, although I suspect they’re never far away.”

Tell us about your favorite places to visit in California. Email your suggestions to CAtoday@nytimes.com. We’ll be sharing more in upcoming editions of the newsletter.

How are you marking the start of 2022? Are you making any New Year’s resolutions?

And before you go, some good news

A paddle boarder near Laguna Beach had an awe-inspiring experience this month when a massive fish swam up to him a few hundred yards from the shore.

A nine-foot sunfish, also known as a mola mola, hung out with the man, Rich German, and his friend for about half an hour before it disappeared into the sea, KCAL9 reports.

“It looks like a mutilated alien shark that got bit in half,” German told KCAL9. “He just kind of lay there. It’s a bizarre animal; they’re just completely docile.”

Thanks for reading. My colleagues will be filling in for me until Jan. 10. Enjoy their excellent work, and happy New Year. — Soumya