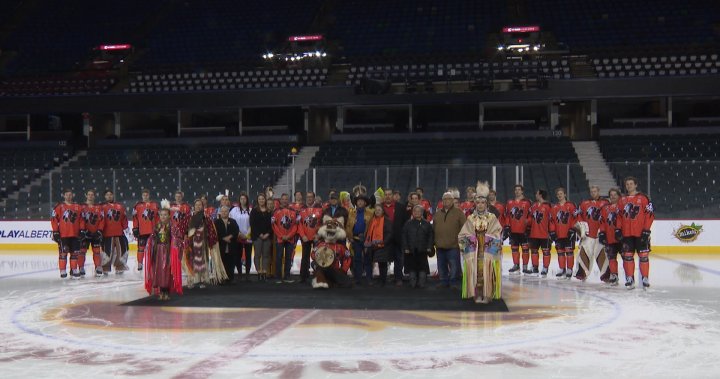 A Siksika Nation matriach’s contribution to her community will be recognized at an upcoming Calgary Hitmen game, as part of ongoing reconciliation efforts between the WHL team and the neighbouring First Nation.

It’s part of the third annual “Every Child Matters” game presented by the Hitmen, Siksika Health Services, the Blackfoot Confederacy and the Aboriginal Friendship Centre of Calgary.

The life of Margaret Bad Boy will be featured before the puck drops. Among her many contributions to her people, she became grandmother to children in Indian Residential Schools.

“I want to call her by her name because her name means Spirit Calling Back Woman. She has a powerful name and she lived her name,” Lucille Wright said.

Gwen Stefani accused of cultural appropriation: ‘I’m Japanese and I didn’t know it’

“When she was of age, her and her husband Dick Bad Boy, they would go to the (residential) school and those students that were orphaned, that had no family, they would watch others go home.

“Because she had a big heart and she had influence over the authorities — she couldn’t take everybody, but who she could take, she brought home.”

Margaret lived for more than 100 years and died in 2001. She helped countless children keep some of their heritage while Indian Residential Schools were active in the area.

The Truth and Reconciliation Commission estimated 150,000 Indigenous children went through the residential school system from the 1840s to 1996.

The number of children who died while in those schools is unknown, but recent efforts have uncovered unmarked burial sites on former residential school grounds across the country.


Allison Red Crow, a grand-nephew, was one of the many children whom Margaret helped hang on his native language.

“When I went to school, I kind of lost that Blackfoot tongue because I was getting taught the English language in day school,” Red Crow said.

“But I was fortunate enough to have her after I was done school, to go back home and to get refreshed on our language because I almost lost our language.

“She kept that language upon our people. Some think we’ve lost it, but it’s still there because of her teachings.”

Red Crow said Margaret taught pride in being a member of the Siksika Nation and Blackfoot confederacy.

He said Margaret would probably be honoured by having a major junior hockey game feature her story.

“When the Calgary Flames won in ‘88-’89, she was probably the number one fan, believe it or not, because I remember watching that game with her,” Red Crow said.

“She would jump off her sofa every time they scored. And especially when they held that Stanley Cup up in the air.


The game on Feb. 4 will also feature traditional dances at intermission, Blackfoot food, and the expected 10,000-strong crowd will be invited to partake in a round dance.

The partnership began in 2018 with an exploration of how they could all work together.

In January 2019, Siksika hosted the Hitmen for a game at the Deerfoot Sportsplex.

The first Every Child Matters game was played at the Scotiabank Saddledome on Feb. 1, 2020 — a 5-0 win for the Hitmen over the Red Deer Rebels.

The Hitmen players and staff have taken part in smudges, Blackfoot naming, and a face-painting ceremony as recently as December 2022.

“The powwow that we had on September 30th (2022), having our players part of that, you have no idea the impact it had on 24 players and continues to have,” Hitmen VP Mike Moore said. “(When) they wear this (Indigenous-themed) jersey. It means something.

“It’s not a Hitmen jersey. It’s an Every Child Matters jersey and it represents something significant. And we are so proud to be able to wear it for one game, but more importantly, to have it in our community and in the world, telling a story that we’ve been able to tell together.”

Newport: Pig owners reunited with Gertie who was dumped on a mountain

Earthquake of 6.3 Magnitude Hits Parts of Pakistan, Epicentre in Tajikistan

‘My gut Tells me we Will Fight in 2025’: US General Warns of war With China