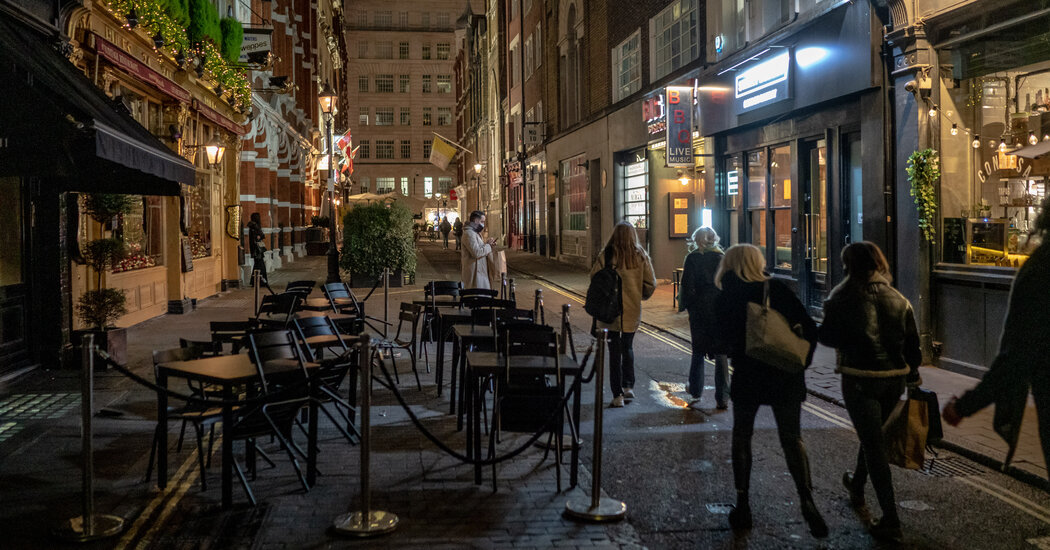 “You could feel Christmas was coming,” Amanda Whiteside, a manager at Gordon’s Wine Bar in London, said of the crowds and buzz. “And then it was gone.”

In Britain, the government responded Tuesday, announcing £1 billion, about $1.3 billion, in aid for the hospitality industry, with one-time grants of £6,000 and rebates for employees’ sick pay.

The grants, said Rishi Sunak, the chancellor of the Exchequer, are comparable to what was “provided to hospitality businesses when they were completely closed.” He said this latest initiative was in addition to assistance already in place.

The promise of more aid comes as a fresh wave of anxiety over the coronavirus and the economy washes over the region. Spain’s government has scheduled an emergency meeting with regional leaders on Wednesday to discuss whether to adopt new restrictions, and Italy’s government is meeting on Thursday.

“We are in a different phase now where lockdown will be potentially more costly,” said Claus Vistesen, chief eurozone economist at Pantheon economics. “Up until now we’ve been used to lockdowns followed by support form the government. I think that will be the case as well, but support will be more conditional, less comprehensive than before.”

Britain recorded the highest number of Covid-19 cases in Europe over the last seven days, according to the World Health Organization.

On Monday, organizations representing more than 100,000 businesses around the country sent an open letter to Prime Minister Boris Johnson, demanding more tax relief and grants to tide them over.

Such concerns were echoed elsewhere. In Germany, businesses are pressing the government to lift new requirements that customers show proof of vaccination or recent recovery. And in the Netherlands, where the government announced a lockdown over the weekend, calls to the nation’s business registry asking for help climbed past 400 on Monday — seven times the number logged the previous Monday.

Although the surge of coronavirus cases brought on by the fast-moving Omicron variant has not yet resulted in the kind of strict lockdown imposed by the Dutch government over the weekend, British businesses argued that the combination of mask mandates, vaccination requirements and uncertainty during the peak holiday season imperils their survival.

The retail, hospitality and leisure sectors “are teetering on the brink,” said Matthew Sims, who helped orchestrate the campaign and leads a business improvement group in Croydon, south of London.

Restaurants, pubs and bars have said that since the government added a new series of restrictions, known as Plan B, on Dec. 8 as a response to the highly transmissible Omicron variant, dinner and party cancellations have been rolling in and foot traffic has disappeared in some areas.

At Gordon’s Wine Bar in central London, it was common to find every table in its cavelike cellar and on its outdoor patio full and a long line of customers waiting to get in before Plan B was implemented.

Customers thinned out and several staff members got Covid, she said. Gordon’s, which calls itself the oldest wine bar in London, is now offering only outside service, and Ms. Whiteside estimates that sales are down about 25 percent.

She said that the government had previously been generous with support, but she was uncertain of what it should do next. “I wouldn’t want to be in those shoes,” Ms. Whiteside said. “They’re in a no-win position.”

Half a mile away, in Soho, the Coach and Horses pub was similarly contending with fewer customers and sick staff. Last week, business was off by a third of what would normally be expected, while on Monday, it fell “off the edge of a cliff,” said Alison Ross, the manager.

Three of the four full-time staff members and two of the four part-timers had contracted Covid. Ms. Ross has hired temporary help and plans to close several hours early on a few days.

The hospitality industry, which lost out on the holiday bump in sales last year, was reviving but had still not bounced back to prepandemic levels. Many had been counting on a busy season.

Simon Emeny, the chief executive of Fuller, Smith & Turner, which owns roughly 400 pubs, has called on the Johnson government for more aid.

“We are right back to where we were in March 2020 with the government keeping hospitality open, while effectively telling the public not to socialize,” Mr. Emeny said in statement. “December should be our busiest trading period — and the revenue generated during this time is crucial for the sector.”

The company has temporarily closed 20 pubs, a spokeswoman said.