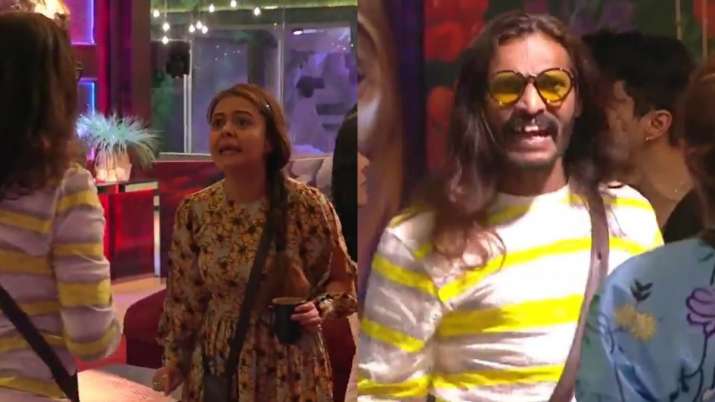 The upcoming episode of Bigg Boss 15 will witness another aggressive argument between Devoleena Bhattacharjee and Abhijit Bichukale. The actress will be seen losing her calm and calling him a ‘dog’. The actress got upset after the Ticket To Finale task got cancelled. In the promo we see, the group of daawedaars which included Pratik, Devoleena, Nishant and Shamita had to carry gift boxes wrapped by other nominated contestants (Karan, Tejasswi, Abhijit, Umar, Rashami) and one of them was selected as ‘shopkeeper’ who had the right to accept or reject the gift boxes.

The nominated contestants are seen conspiring to let no daawedaar win this task, and ‘shopkeeper’ Abhijit ends up rejecting Devoleena’s stamped boxes in the first round.

She pounces at him with a barrage of verbal attacks and blames him for getting the task cancelled. Abhijit angrily retorts, “Kya karegi? Maaregi mujhe?” She starts throwing abuses and insults right on his face; and in a fit of rage, Abhijit smashes a glass into pieces!

This is not the first time Abhijit and Devoleena had an ugly showdown. Earlier, when Abhijit repeatedly asked Devoleena for kisses despite her refusal also instigated a huge fight between the two.

Today’s episode will also be packed with fun and laughter, as Rakhi Sawant goes on a hunt to find her food items that have been missing. She goes through Abhijit’s stuff, and lo and behold! She finds her food there and goes berserk. Abhijit starts playing all innocent as he claims somebody has framed him by putting all those items without his knowledge. Rakhi chases him to teach him a lesson, while everyone else has a hearty laugh.

Some Gems of Urdu Poetry to Start a ‘Mubaarak’ New Year