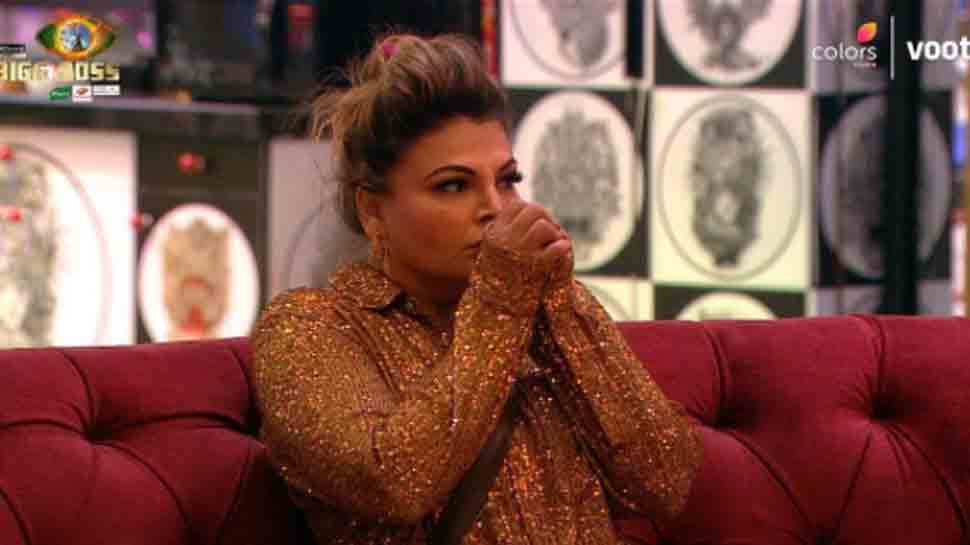 The Ticket To The Finale task continues. Tejasswi and Nishant-Devo and Shamita are pitted against each other. Rakhi announces Team B (Team Green) as the winner. Tejasswi says since she is closer to Devoleena and Nishant, she chose to breaks Shamita’s matki. By default Team A (Team Red) wins. Pratik, Shamita, Nishant and Devoleena will battle it out for the Ticket To Finale. Karan Kundrra, Umar Riaz and Tejasswi Prakash are nominated for eliminations alongside Rashami Desai and Abhijit Bichukale.

Pratik and Nishant discuss their journey in the house. Umar is angry with Nishant saying the latter always flipped in the game. Umar asks Devoleena why she didn’t play with Tejasswi. Devo says that Teja herself said she wanted to play with Umar. She adds that her priority is Rakhi, Pratik and then Teja. Rakhi says that Karan is playing it safe. Rakhi says had Karan wanted, he would have made Tejasswi nominate Abhijit and save Rashami, but he didn’t. Umar and Karan discuss Devoleena’s game.

Umar and Karan argue over Tejasswi. Umar is miffed that he couldn’t convince her to play with her. Karan says she is playing her own game with Nishant. Karan tells him that she has shifted and, however, he would have said anything but she wouldn’t have agreed as she has been on her own ego trip.

Umar, Pratik and Nishant are in the kitchen where they are having an argument. Umar says that Nishant is going back on his words that he will help him during the game. Rashami joins and Nishant gives her back. Rashami says that Teja has become his best friend.

As Rashami questions Nishant, Pratik and Tejasswi defend Nishant. Karan says Nishant and Shamita are trying to get Tejasswi on their side.

Umar and Rashami discuss Nishant. Rashami says Nishant backstabs a lot whereas Umar praises his brain. Elsewhere, Abhijit asks Pratik to lift him up. Pratik does and takes him out of the room. Rakhi curses everyone for stealing luxury items.  Rakhi finds food items in Abhijt’s basket. Abhijit defends himself saying someone is plotting against him. Rakhi wants Abhijit to give back Chakli.

Teja asks Karan what did he talk with Umar outside and whether they had a fight. Karan reveals he was asking why couldn’t he convince Teja to play for Rashami. Nishant joins the conversation. Teja asks why does Rashami doesn’t take the same efforts to be friends with her as she does to be with him. Karan and Teja talk about the next task. Teja is shocked that Karan won’t be playing with Nishant. Teja says that Rashami has been backbiting, passing remarks and more on their relationship. Teja and Karan get into a small argument over who they’ll be playing for. Karan takes Shamita’s name. Tejasswi says she will play for Nishant and Devoleena.

Later, Tejasswi and Umar get into an argument. Teja lashes out at Umar for talking about her with Abhijit. Tejasswi gets angry. Karan takes Umar aside. Karan tries to calm Umar down. Karan asks Umar to play for himself. Teja joins and Karan asks him to go away. Outside, Teja says that she wants to hear what’s going on between Umar and Karan. Umar says Teja has changed after the power shifted.

Later, Karan and Tejasswi discuss about Umar’s sudden change of behaviour. Karan says he is not concerned with Rashami or Devoleena. His only concern is Umar. Late in the night, Karan once again gets angry at Tejasswi and asks her to go away.

The next morning, Abhijit once again try to be flirtious with Devoleena and the latter slams him. Karan tells Teja that he has an attention problem. In the bathroom, Rashami and Shamita talk about how Nishant is against her. Later, Shamita tells Nishant about the same. Nishant and Shamita talk about Rashami. Karan spills the beans on Rashami-Shamita’s conversation in front of Teja. Tejasswi also reveals Shamita’s conversation with Rashami from the previous evening.

Rakhi talks to Umar about the upcoming task. She asks whether he can play for Pratik. Umar says he can play for Shamita. Teja talks to Devoleena about Rakhi’s conversations. Rakhi then talks to Pratik and tells him that Devo is playing for Tejo, Karan will for Nishant. Pratik says he can’t make any promises. Abhijit keeps flirting with Devo. Pratik takes her aside and he asks her to take a stand for herself against Abhijit. Later, Devo talks to Abhijit and reveals that she is not comfortable with certain things. She says she is not comfortable with touch. Devoleena asks him to be careful. Abhijit keeps interrupting and doesn’t listen to her.

The new task is called BB gift shop. Pratik, Shamita, Devoleena and Nishant will be running for the contendership. Karan, Umar, Abhijit, Tejasswi, Rashami will make gifts for the contenders which the contenders will fill in the cart and take to the shopping mall where the shopkeeper will analyse and determine which of the gifts are good/bad, that is acceptable/unacceptable.

Abhijit, Umar, Tejasswi, Rashami and Karan strategise and plan to cancel the task. Karan and Abhijit talk to Nishant and Teja talks to Devoleena. The contestants keep discussing the strategies. Devoleena and Abhijit get into a fight and she calls him selfish.

Rakhi too praises Abhijit for changing the game. Abhijit and Devoleena get talking. Pratik joins and asks whether they are planning to cancel the task. Pratik says Abhijit may have done it purposely. Devoleena trusts Abhijit and feels that the rest of them did it on purpose. Pratik and Devoleena get into argument and she breaks into tears. Abhijit joins her. She asks if he is playing with them.

Bigg Boss slams housemates for deciding that they will be cancelling the task. He reveals planning of all contestants before housemates and cancels the task.

Bigg Boss announces that the next task will be around eliminations. He warns that nobody would be able to cancel that task. Devoleena asks Abhijit whether he was involved in the strategy as well. With that, the episode ends.

Northern Ireland shoots for success with TV and film productions

Being in front of camera rejuvenates me: Aman Verma