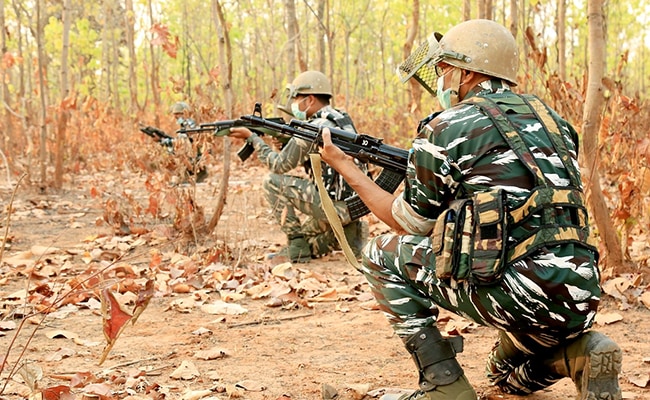 A joint operation was launched against Maoists. (File)

Madvi Hidma, a top of leader of Maoist insurgents and mastermind of some of the biggest attacks on security forces, has reportedly been injured in an encounter in Chhattisgarh during a surgical strike on Wednesday.

In what sources described as the largest operation of its kind in recent times, helicopters, drones, commandos of the elite CoBRA unit of the Central Reserve Police Force, Chhattisgarh Police and the Greyhound special forces unit of Telangana Police were sent to scope out Hidima’s group, known as Battalion 1.

The strike comes days after Union Home Minister Amit Shah in Chhattisgarh said the Maoist insurgency will be neutralised completely before the 2024 national elections.

According to officials, when one of the CoBRA units was descending from a chopper, at a remote camp near the intersection of the borders of Chhattisgarh, Telangana and Odisha, they were fired upon by Maoists.

“A unit of the CRPF’s CoBRA battalion was being dispatched to a forward operating base in a chopper. When the team was descending from the helicopter, an encounter broke out between CoBRA commandos and Maoists,” a statement from the office of the Inspector General, CRPF’s Chhattisgarh sector, said.

“On finding that security personnel were zeroing in on them, Maoists escaped. No harm was reported to the CoBRA commandos, and an effort was on to gather information about the loss caused to Maoists in the incident. A search operation was underway in the area,” it said.

A statement issued by Maoists said security forces launched “aerial attacks” in several areas at 11 am.

According to sources, a few troopers were also injured in the operation, but they are safe. Bullets struck one chopper, which landed at Elmagunda camp in Sukma.

Officials have not confirmed reports that 55-year-old Madvi Hidma was injured in the strike. Hidma has been involved in more than two dozen attacks since 2004, including the one in Dantewada in 2013 that left 76 CRPF personnel dead, and the Jhiram Ghati attack, in the same year, which wiped out the Congress leadership in Chhattisgarh. He carries a bounty of Rs 45 lakh on his head.

The Maoists, also known as Naxals, have waged an armed insurgency against the government that has killed hundreds of people over six decades. They say they are fighting on behalf of the poorest, who have been left out of the country’s economic boom.

Since 1967 the group seen as the greatest threat to the country’s internal security have asserted control over vast swathes of land in central and eastern India, establishing a so-called “red corridor”. They operate from thick forests, and their operations against the Indian administration and forces are shrouded in secrecy.

Why do you want activist Teesta Setalvad, her husband back in jail? Supreme Court asks CBI, Gujarat

Issue of art trafficking back in the spotlight