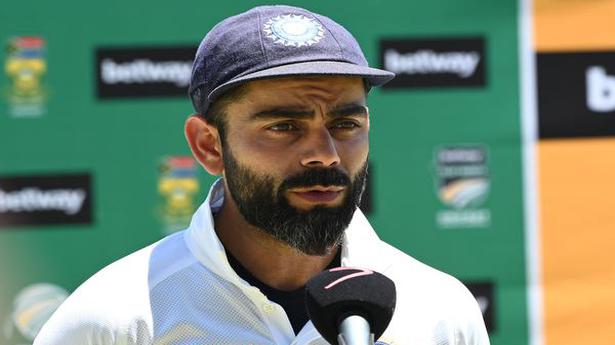 Requesting the controversies to be put to rest at the turn of the year, Sharma stressed there is nothing wrong between Kohli and Rohit.

More than a fortnight after Virat Kohli insisted on not being told to reconsider his decision to step down as India’s T20I captain, chairman of national selection panel Chetan Sharma has said the selectors had requested Kohli to not announce it “on the cusp of the World Cup campaign”.

“It was a surprise. All the selectors asked Virat to reconsider that for the sake of Indian cricket, please continue as captain. It may affect the World Cup campaign. Everybody requested him to not announce ahead of the World Cup,” Sharma said on Friday after announcing India’s squad for the ODI series versus South Africa.

Soon after the BCCI axed Kohli as the ODI captain earlier this month, BCCI chief Sourav Ganguly had said the BCCI had asked Kohli to not step down as T20I skipper. Despite Kohli contradicting the BCCI chief, Sharma said the selectors were in no position to have a detailed discussion in September.

“How could we discuss it anything at that time? The team was on the cusp of a World Cup so we tried telling him to wait till the World Cup, but he had made up his mind,” Sharma said, adding Kohli remains a vital cog for Team India.

“Virat will continue to remain a very important player. The selectors feel the team revolves around him. But we feel there should be one captain for white-ball formats. It’s a hard decision but the selectors have to take hard decisions based on need of the hour.”

When Kohli announced in September that he would step down as India’s T20I captain after the T20 World Cup in November, his statement had stresed he desired to continue as ODI and Test captain. But Sharma said the selectors had to take the hard call for the future of Indian cricket.

“T20s was his decision, ODIs was selectors’,” said Sharma, adding that there is no miscommunication or confusion between Kohli, selectors and the BCCI.

“There’s no confusion between the Board and Virat. We wanted to announce (ODI) captaincy issue in advance because we wanted to give Rohit and Virat to get it into the system. There is no communication problem between selectors, board and players,” Sharma said.

Requesting the controversies to be put to rest at the turn of the year, Sharma stressed there is nothing wrong between Kohli and Rohit.

“Virat and Rohit are absolutely fine. Please avoid speculation. Both plan together really well. They have fantastic camaraderie. They work together as a team, family and unit. Please leave controversies behind in 2021,” he said.

There wasn’t much happening on the wicket: Shreyas Iyer on late...