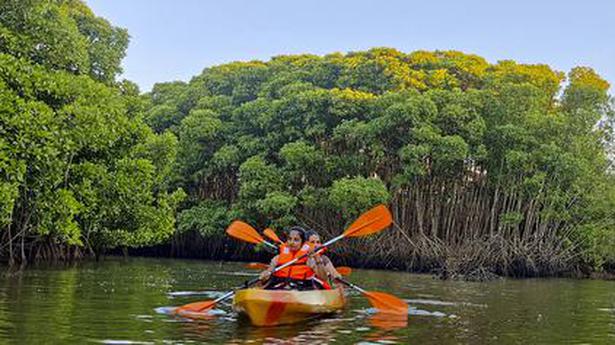 Want to have a closer look at the mangrove forests in the coast and enjoy the beauty of backwaters leisurely? Just head to Saligrama in Udupi district where one can enjoy kayaking amid thick mangroves in the backwaters of the Seetha.

Two youngsters from Kodi in the vicinity of Parampalli near Saligrama have procured as many as eight kayaks investing close to ₹4.5 lakh on their own to take tourists amidst the lush mangroves. While the backwater formed by Seetha is about 8 km long, Lokesh and Mithun, the entrepreneurs, take tourists for about 3+3 km ride in about two hours.

“Though Udupi district is blessed with abundant backwaters, the Parampalli stretch has one of the best mangroves with shallow waters thereby posing minimum threat to tourists,” said Mr. Lokesh. The depth is just about four-five feet along the stretch and even novices can paddle the kayak with ease, he told The Hindu on Tuesday.

Mr. Lokesh and Mr. Mithun accompany tourists during the ride for guidance and also to sneak into thick mangroves. “Tides play crucial role in enhancing the rides. While high tides allow tourists to go into the mangroves, it becomes difficult during low tides. That’s why we ask tourists to inform us before coming,” he said.

Asked what was the inspiration to introduce kayaking in the less popular region, Mr. Lokesh said he had heard and read lot about kayaking and other means of exploring backwaters. “The region also has one of the best mangroves and hence, we decided to introduce kayaking,” he said adding there was no government support for the initiative. “We arranged funds for procuring the kayaks,” he added.

Kayaking starts and ends near the Parampalli bridge while the service is available between 7 a.m. and 7 p.m. One can also witness birds and other wild as well as marine life during the ride. Tourists, besides being given tips about safe ride, are also provided life jackets for safety. For a two-hour ride, the organisers charge ₹300 per head while each kayak can host two people.

“No Water, Food”: Indians In Ukraine City They Were Asked To...

Buying terracotta diyas on Diwali isn’t being ‘vocal for local’, must...