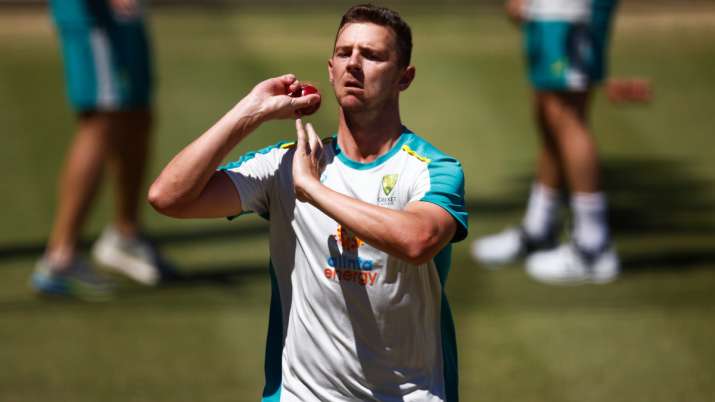 Australia’s selectors will be in a tough spot to choose the bowling unit for the fourth Ashes Test against England in Sydney after Josh Hazlewood was seen regaining his complete fitness since he suffered a side strain.

With Hazlewood on his way to peak fitness, Australia will have six in-form pace bowlers and one spinner to pick their squad and the selectors will have some “hard conversations” when they sit down to pick the squad. Skipper Pat Cummins, Mitchell Starc, Jhye Richardson, Scott Boland, and Michael Neser are the pacers on the selectors’ list for the next Test.

Hazlewood got through around 35 minutes of gentle bowling in the MCG nets on Thursday, still appearing in some discomfort on return from a side strain, according to reports in Australian media.

It was Hazlewood’s first bowling session in almost three weeks, after hurting his side in the Ashes opener at the Gabba and missing the next two Tests.

With the series already wrapped up in Australia’s favour, there is an opinion that Hazlewood should be given more time to recuperate, especially with a tour of Pakistan looming in March.

But chief selector George Bailey said his panel would not hold Hazlewood back if he is fit and available.

“He’ll build up as he would before any sort of Test. He’ll talk a lot with (assistant) Andrew McDonald and (physio) David Beakley to see how he’s going.

“If Hoff’s confident and he says he’s right to go I think we back him in. He’s earned that trust.”

Bailey said despite Australia sealing the series following the innings win in Melbourne, pacer Mitchell Starc may not be rested despite being involved in all Tests so far. Starc was required only to bowl 25 overs at the Melbourne Cricket Ground (MCG) and the early win means he had two extra off days, making it a week of rest before the fourth Test.

“Your plans are constantly changing because you’ve got no idea how many overs the bowlers are going to bowl,” Bailey said. “So you’ve got to stay pretty fluid around that.

“Today would have been would have been day five (at the MCG). So our quicks, in particular, not having as heavy a workload as they had in Adelaide and a couple of extra days off will all work in their favour.”

As of now, skipper Cummins, who missed the second Test due to a Covid scare, is the only paceman assured of playing the fourth Test.

Jhye Richardson would also miss out after sitting out the Melbourne Test with minor leg soreness following his match-winning five-wicket haul in Adelaide.

However, if Starc and Hazlewood both play, it means there will be no room for debutant Scott Boland despite his stunning 6-7 performance on debut at the MCG.