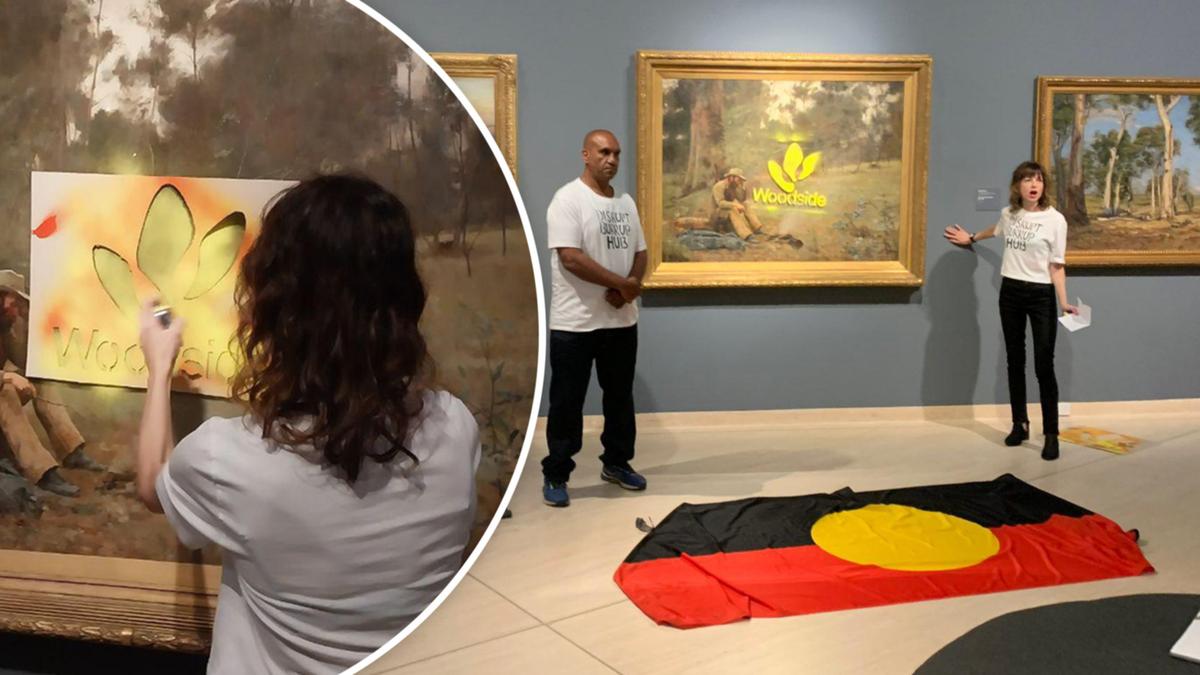 Activists have spray painted over an iconic artwork at the Art Gallery of WA, covering the colonial-era piece with a Woodside logo.

Two activists, who are part of the Disrupt Burrup Hub campaign, entered the gallery about 10.30am on Thursday before painting a bright yellow Woodside logo over Down on His Luck — painted by Frederick McCubbin in 1889.

The activists, Joana Partyka and Desmond Blurton, who both donned homemade t-shirts with the writing ‘Disrupt Burrup Hub’ — said the were protesting a fossil fuel project “desecrating sacred Murujuga rock art” up to 50,000 years-old at the Burrup Peninsula in the Pilbara.

Down on His Luck is one of the gallery’s most prized pieces, a classic Australian artwork dating back to 1889 depicting a swagman sitting by a campfire in the bush.

The vandalism stunt was caught on camera, with the vision later released to the media.

In the footage, Ms Partyka is seen spray painting over the artwork before super-gluing her hand to the wall next to it and reading from a piece of paper outlining her justification for the incident. A stencil of the Woodside logo sits at her feet.

WATCH THE VIDEO IN THE PLAYER ABOVE

Ballardong Noongar man Desmond Blurton was standing next to her with an Aboriginal flag laid across the floor, before making an Acknowledgement of Country.

Police were called to the gallery, with four officers entering the building before escorting Ms Partyka out a short time later.

Mr Blurton was allowed to leave without being detained.

A spokesperson for the gallery confirmed the artwork was covered by Perspex and had not been damaged in the incident.

A WA Police spokesperson said officers attended the gallery about 10.45am after reports of a disturbance.

“Upon arrival a protester was located inside the gallery, where it is believed she had damaged a painting and glued her hand to a wall,” the spokesperson said.

“A 37-year-old woman was taken into custody and is currently assisting police with inquiries.

“A second protester who was in company with the woman, left the gallery after asked by security and prior to police attendance.

Speaking to media outside the gallery, Mr Blurton — alongside a fellow activist named Trent — said the rock art needed to be protected more than the art inside the gallery.

“(That painting) is barely 100 years old, and they’re protecting that…what about our ancient rock art? It needs to be protected also,” he said.

“It (needs to) not be in a building, not the rock art removed somewhere like this. It needs to stay on Country on our tribal lands.

“It’s our culture, our law, our heritage.”

Mr Blurton claims their actions were not to protest the destruction of art, by destroying art.

Trent, who refused to give his last name, said the art was not destroyed but the action was a symbolic message to Woodside and the State Government.

“The rock art that is being destroyed, we’re talking 50,000 years old and has over 1 million pieces of records kept by Aboriginal law people,” he said.

“That is being destroyed by acid going through 1000 times a level in that peninsula.

“It’s completely wrong and bit of paint on some perspex isn’t destroying art — what’s happening up in the Peninsula is what is destroying art.”

Trent claims the painting was behind a piece of clear plastic sheeting and wasn’t damaged in the protest.

The Burrup Peninsula is known as Murujuga to First Nations people, and is deemed a deeply sacred place that contains the largest and oldest collection of Aboriginal rock art in Australia.

Woodside Energy have been developing a $50b liquefied natural gas project at the Peninsula.

“Woodside has a proven, more than 35-year track record of safe, reliable and sustainable operations on Murujuga, delivering natural gas to customers in Western Australia and around the world,” the spokesperson said.

“Our environmental approach complies with all applicable environmental laws and regulations and is underpinned by robust science-based decisions.

“Peer-reviewed research has not identified any impacts on Murujuga rock art from industrial emissions associated with liquefied natural gas production.”