India played its third match today of the series against Sri Lanka in Trivandrum and Virat Kohli lead India to a historic win. India thrashed Sri Lanka by a record 317 runs in the third ODI to clinch the three-match series 3-0 on Sunday. Meanwhile, Virat Kohli also scored his 46th hundred in this match and while doing that, he slashed two of Sachin Tendulkar‘s world records.
Anushka Sharma was all hearts as she dropped a picture of Kohli with a huge heart and wrote, “what a guy!” and “shabaash!” 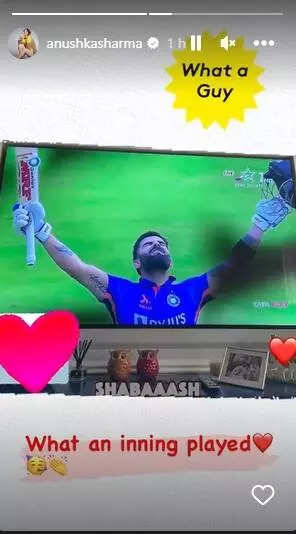 Virat and Anushka continue to dish out couple goals every since they got married. The couple completed five years of marriage as the couple tied the knot in December 2017. The couple have a daughter Vamika who recently turned two, four days ago. Anushka had dropped an adorable picture with her and wrote, “Two years ago my heart grew wide open ❤️ 🙏🧿”

Virat had also dropped a picture with her and he wrote, “My heartbeat turns 2”

On work front, Anushka is alsos set to play a cricketer in her next, ‘Chakda Xpress’ which is based on the life of cricketer Jhulan Goswami. The film has been wrapped up and will see a release this year on OTT.

Kareena Kapoor shares pics as she dresses up in black for event, fans react | Bollywood

Ranbir Kapoor and Alia Bhatt jet off to Jodhpur ahead of...