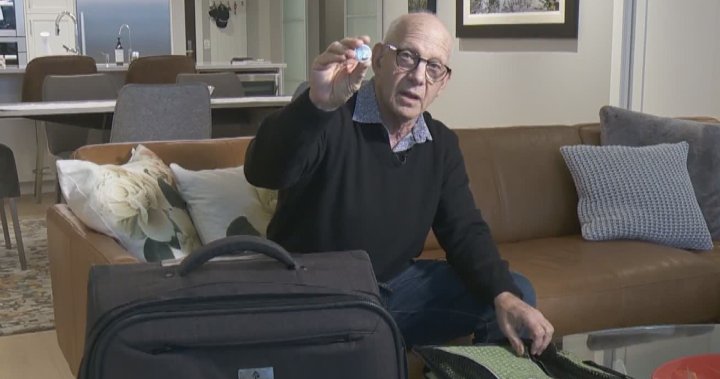 An Air Canada customer who tracked his lost bag using an AirTag has finally received his luggage after he battled with the airline for weeks to retrieve his bag.

“So frustrating knowing exactly where my bag was and that probably added to a lot of the angst I felt over that 45-day period,” Paul Kliffer told Consumer Matters.

This past November, the Victoria resident and his wife were returning home from Mexico City. When they landed in Vancouver before departing to Victoria, Kliffer’s wife checked their AirTag on her phone.

“It said our bag was 4000 kilometres away, which didn’t sound good, “ Kliffer said.

The bag was still sitting at Mexico City International Airport.  Kliffer said he contacted an Air Canada agent and opened a claim right away and was told the bag would be returned home shortly.

“My bag never arrived. Over the next three days, I went back out to Victoria and they again reiterated there was nothing they could do except send a note to Mexico City,” said Kliffer.

After two weeks, Kliffer said he was shocked to learn his AirTag showed the luggage had moved to the international airport in Madrid, Spain.

“There’s this feeling inside. You feel helpless like there is nothing you can do,” he added.

3:15Consumer Matters: B.C. man’s luggage ends up in Spain instead of Mexico


Consumer Matters reached out to Air Canada on Kliffer’s behalf.  Air Canada stated that it was unsuccessful in recovering the bag and had “advised the customer we are moving to compensation. The claim is currently being processed and we will be following up directly with the customer.”

However, after Consumer Matters reported Kliffer’s story, he said he received a call from an Air Canada employee the next day.

“He found my bag through Iberia Airlines,” Kliffer said. “It was in the Iberia Airline warehouse. So he made arrangements for that bag to be transported from Madrid to Victoria.”

Those arrangements were made once Kliffer said he was able to successfully identify the contents inside the bag.  Still, Kliffer said he didn’t get much of an explanation from Air Canada as to how the bag ended up in the hands of the Spanish carrier, which is based in Madrid.

“(The agent) believes the Air Canada bag tag must of gotten ripped off along with my personal ID and somehow my bag ended up on the belt for Iberia Airlines and so Iberia Airlines took control of that bag.”

Alec Baldwin to be charged with involuntary manslaughter in ‘Rust’ shooting

In addition, Kliffer said Air Canada has agreed to fully compensate him.

John Gradek, a lecturer at McGill University and program coordinator for the aviation management program said, in his opinion, when it comes to baggage handling, it’s often not a priority for the airline.

“It’s not part of the service strategy of an airline to really make sure the bag takes the least amount of detours to a destination,” he said.

“AirTags to me are a way for you to hold the airline accountable.”

Consumer Matters reached out to Air Canada about the details surrounding Kliffer’s missing luggage, but did not get a response from the airline.

‘It’s being left in the dark,’ mother of murdered Idaho student...