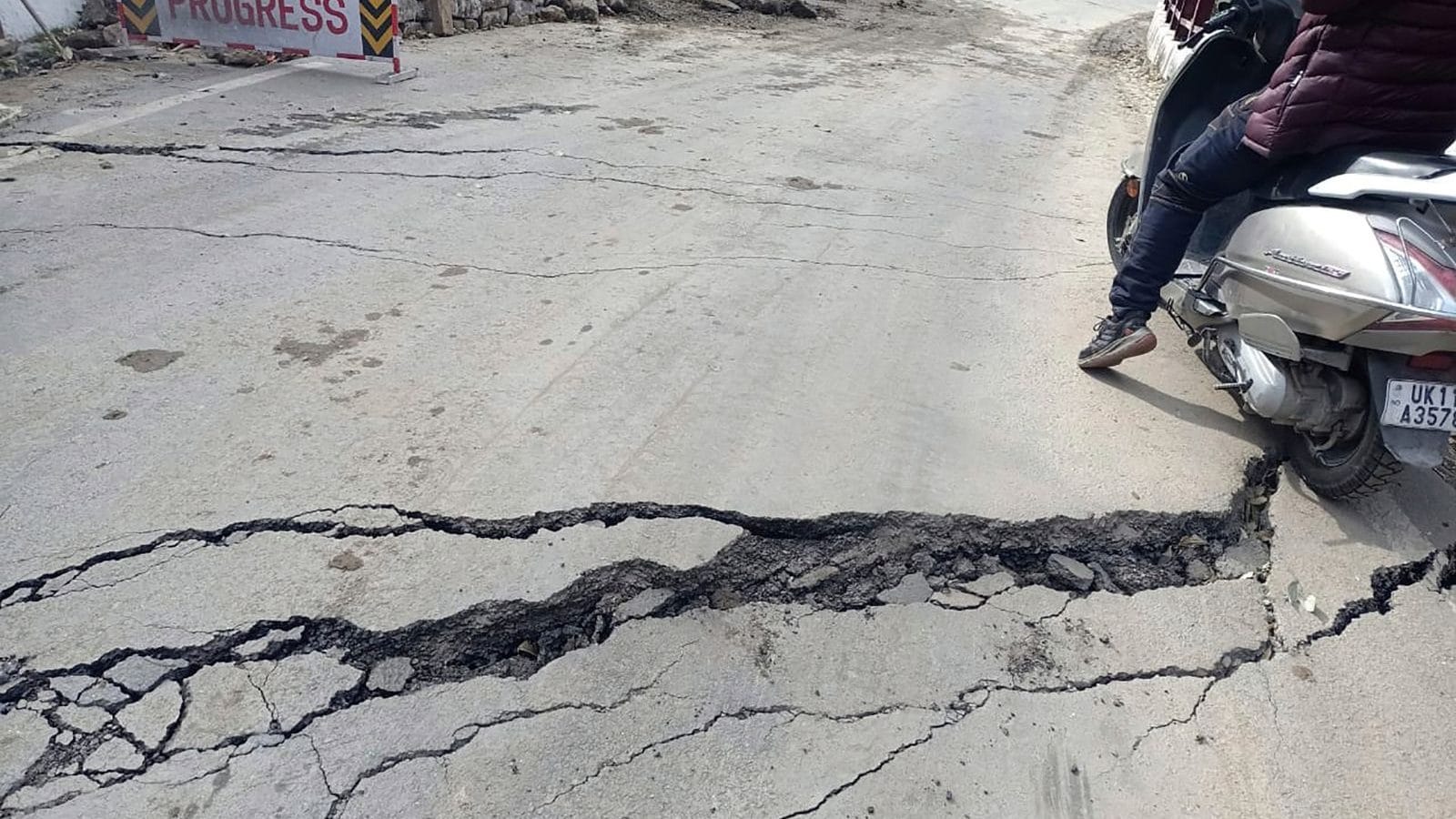 A motorist navigates his way through a crack on a road in Joshimath. (AP)

The decisions were taken at a meeting of the state cabinet here chaired by Chief Minister Pushkar Singh Dhami.

The Uttarakhand government on Friday decided to waive for six months electricity and water bills of families and individuals affected in the subsidence-hit Joshimath.

It also decided to conduct a study on the carrying capacity of all towns located in the hills.

The decisions were taken at a meeting of the state cabinet here chaired by Chief Minister Pushkar Singh Dhami.

The cabinet gave an in-principle approval to the construction of prefabricated houses for short-term rehabilitation of the affected people of Joshimath at identified locations in Koti Farm, Pipalkoti, Gauchar, Gaukh Selang, and Dhak villages after their survey.

It also decided to put on hold repayment of bank loans owed by the affected people for one year.

The cooperative banks will implement the one-year moratorium on repayment of loans immediately, while the state government will request the Centre to ask commercial banks to take a similar measure for the affected people in Joshimath, chief secretary SS Sandhu said at a press conference after the cabinet meeting.

The cabinet decided to increase the amount being given by the state government to the affected families to pay rent from Rs 4,000 per month to Rs 5,000 per month. It also authorised the Chief Minister to increase it further on the recommendation of the District Magistrate.

People in Joshimath have been complaining that Rs 4,000 for rent is too low.

Each affected family staying in temporary relief camps built in hotels and residential units will be paid Rs 950 per room per day for their accommodation besides Rs 450 per head per day for expenses.

Besides, they will get Rs 80 per day to buy feed for big animals and Rs 45 for small ones.

Long and short term relief measures can be taken up out of the state government’s own resources till the time a package is allocated by the centre, Sandhu said.

The amount will be adjusted when the package is received from the Centre.

The cabinet also authorised the Chief Minister to take a call on allocating works related to treatment of toe-erosion and subsidence to either the irrigation department or WAPCOS Ltd in Gurugram, Haryana.

It would depend on which of the two submits the DPR first and is ready to carry out the works in EPC (Engineering, Procurement and Construction) mode, Sandhu said.