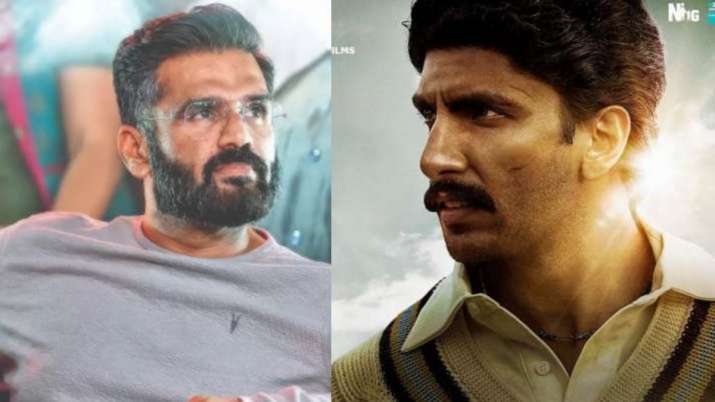 Directed by Kabir Khan, ‘83’ is certainly one of the most anticipated films of 2021, revolving around India’s historic 1983 World Cup win. Suniel Shetty, who along with Khan and Rhea Chakraborty attended Ranveer Singh‘s sports drama’s Mumbai screening, shared his reaction on social media. He said that he was shaken and teary-eyed after watching India’s 1983 World Cup victory recreated on screen. Suniel heaped praises for Ranveer Singh’s sports drama and claimed that he couldn’t spot the actor as he has gone through an ‘incredible transformation’ onscreen to essay the role of Kapil Dev.

Taking to Twitter, the actor wrote, “Went to watch @RanveerOfficial in #83. Couldn’t spot him. There was only #KapilDev on screen. Incredible transformation. I am stunned beyond. A team cast that could’ve walked off Lords. Got gooseflesh like I was reliving ‘83. Still shaken & teary-eyed at the artistry & emotions.”

Sheer belief. That’s what it is. The goodness of being @kabirkhankk. The faith in his story & the power of his scenes & characters. Blew my socks off. And the backing of #SajidNadiadwala @WardaNadiadwala in a project that’s a personal tale. The tears are real Folded hands,” he added.

The cricket-drama chronicles India’s win under Kapil Dev’s captainship when the team defeated West Indies in the final to clinch their first-ever World Cup trophy in 1983. As Ranveer steps into the shoes of Kapil Dev, his wife and actress Deepika Padukone essays the role of Romi, Kapil’s wife. Deepika Padukone, Ranveer Singh burn the oomph quotient at Red Sea Fest as they promote 83