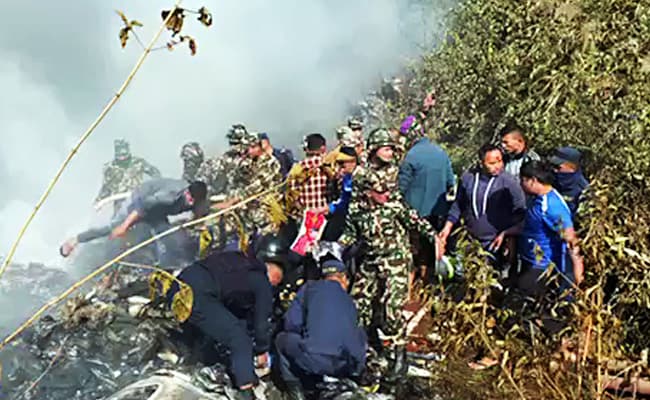 Plane Crash in Nepal: The aircraft crashed on the bank of the Seti River.

Five Indians were on board the Yeti Airlines aircraft that crashed in Nepal’s Pokhara this morning, the nation’s Civil Aviation Authority has confirmed in a tweet. At least 67 people died after the Nepalese passenger plane , which was carrying 72 people including 15 foreigners, crashed into a river gorge while landing at the airport in Pokhara — a major tourist destination in the Himalayan nation.

The plane crashed on the bank of the Seti River between the old airport and the new airport around 20 minutes after the take-off, suggesting the aircraft might have been on the descent. The flight time between the two cities is 25 minutes.

At least 40 bodies have been recovered from the accident site, according to local media.

“The loss of lives in a tragic plane crash in Nepal is extremely unfortunate. My thoughts and prayers are with the families of the bereaved. Om Shanti,” tweeted Mr Scindia.

The Indian Embassy said that it is in touch with local authorities and is monitoring the situation. It also shared helpline numbers for Kathmandu and Pokhara.

Embassy is in touch with local authorities and is monitoring the situation.

Nepal, home to eight of the world’s 14 highest mountains, including Everest, has a record of air accidents.

The last major air accident in Nepal happened on May 29 when all 22 people onboard, including four members of an Indian family, were killed as a Tara Air plane crashed in Nepal’s mountainous Mustang district.

Germany To Send Leopard Tanks To Ukraine, Allows Others To Do So: Report

Amul hikes milk prices by Rs 2 per litre from Tuesday