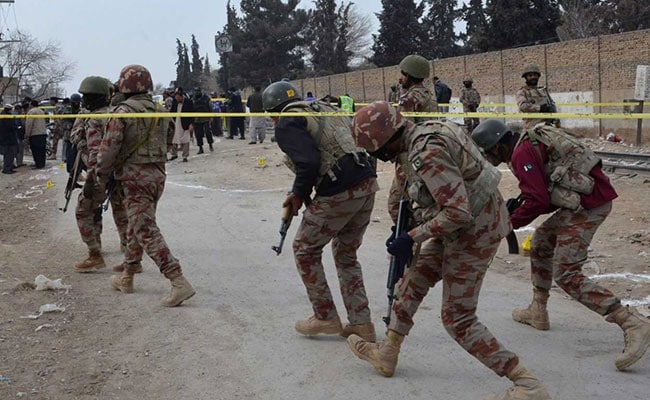 The TTP and Islamabad agreed to a truce in November (Representational)

Four soldiers were killed in a firefight with the Pakistani Taliban, the country’s army said Friday, in the deadliest confrontation between the militants and security forces since a truce was called off earlier this month.

Security forces were raiding suspected hideouts in the town of Mir Ali in North Waziristan when four soldiers were killed “during an intense exchange of fire”, an army statement said.

One “terrorist” was arrested with weapons and ammunition, it added.

Tehreek-e-Taliban Pakistan (TTP) — a separate movement that shares common roots with the militants that took power in Afghanistan in August — said the army raid was on a “centre” for its group.

The TTP claimed in a statement that seven soldiers had been killed in its counter attack on Wednesday night, while its fighters escaped unharmed.

In a separate incident the army said Friday that two men were killed in a clash in neighbouring Tank district in the province of Khyber Pakhtunkhwa.

The militants were involved in “terrorist activities against security forces, targeted killing and kidnapping for ransom”, a statement said.

The TTP did not comment on the second incident.

Pakistan’s restive border region has long been a stronghold for groups such as the TTP, which operates across the porous boundary with Afghanistan.

Founded in 2007, the movement is most notorious for a 2014 attack on a school in Peshawar which killed nearly 150 children.

Islamabad in response waged a crushing crackdown on the Islamist group, forcing fighters into hiding in Afghanistan.

Pakistan is now attempting to quash a TTP comeback following the victory of the Afghan Taliban.

The TTP and Islamabad agreed to a truce in November.

But it failed on December 10, with the hardliners accusing the government of violating the terms of the truce.