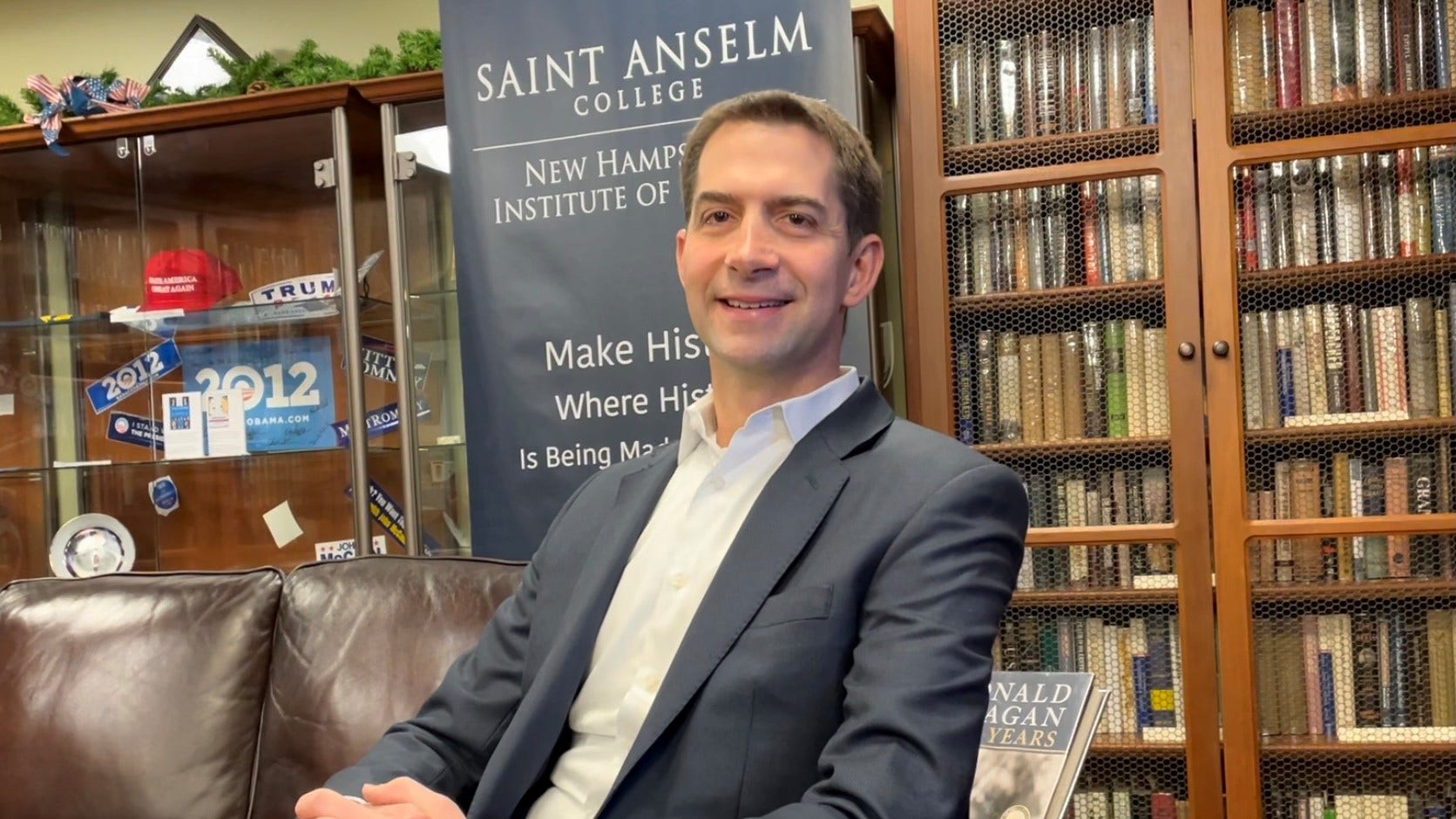 Sen. Tom Cotton of Arkansas returns to the first-in-the-nation caucus state of Iowa this week.

On Thursday, Cotton, an Army veteran who served in combat in the Iraq and Afghanistan wars and a rising star in the Republican Party, will headline the Story County Iowa GOP’s annual fundraising dinner.

We also learned a few days ago that the Cotton will return next month to New Hampshire, which holds the first primary in the presidential nominating calendar. The senator will headline the state GOP’s annual golf tournament on August 16 at the picturesque Wentworth by the Sea Golf Club in Rye, New Hampshire.

Cotton, who faced nominal opposition as he easily won reelection in 2020 in heavily red Arkansas, has crisscrossed the country the past year and a half, helping fellow Republicans running in November’s midterm elections. And he’s made multiple stops in Iowa and New Hampshire.

“This shows that Sen. Cotton and others are moving forward and making their own decisions and doing so by building relationships in these early states and doing events for other candidates,” a Republican strategist in Cotton’s political orbit told Fox News. “Sen. Cotton’s focused on helping the Iowa and New Hampshire state parties be successful in 2022, but also establishing relationships and laying the groundwork for other possibilities.”

Cotton publicly demurs when asked about 2024.

“I’m not making any decision right now about the future. The election that’s looking at us right in our windshield is the 2022 election,” Cotton told Fox News in December during a stop in New Hampshire.

Sen. Tom Cotton of Arkansas sits down for an interview with Fox News at the New Hampshire Institute of Politics, in Goffstown, N.H. on Dec. 3, 2021
(Fox News)

But the senator met last month with top donors and advisers at the Hay Adams Hotel in downtown Washington D.C. Sources attending that meeting confirmed to Fox News that Cotton said he wouldn’t defer to any other potential candidate – including former President Donald Trump – when it comes to his own decision about launching a national campaign. And Cotton said that decision on whether to run for president would come after November’s midterm elections. News of the gathering was first reported by Politico.

Ager, who as a RNC committee member, stays neutral in GOP primaries, said he could see Cotton resonating with New Hampshire Republicans should he decide to run for the White House in the 2024 cycle. “Sen. Cotton has been at the forefront of articulating the Republican message nationwide,” he said.

Former South Carolina Gov. Nikki Haley, who served as ambassador to the United Nations in the Trump administration, returned to Iowa this past week.

Haley on Wednesday was the main attraction at an Iowa GOP regional reception in Dubuque and on Thursday she headlined Rep. Randy Feenstra’s annual Family Picnic fundraiser in Sioux Center, in the conservative northwest portion of the Hawkeye State.

When asked by reporters in Sioux Center if her 2024 decision would be influenced by the ongoing congressional hearings into the deadly Jan. 6, 2021 attack on the U.S. Capitol to try and derail congressional certification of now President Biden’s Electoral College victory over Trump, Haley didn’t directly answer.

But she did offer a headline, saying, “I had the pleasure of serving the state that raised me and defending the country I love so much. And if it looks like there’s a place for me next year, I’ve never lost a race. I’m not going to start now. I’ll put 1,000% in, and I’ll finish it.”

Ric Grenell, who served as acting Director of National Intelligence during the Trump administration, also paid a visit to Iowa this past week.

Grenell, who some pundits view as a potential running mate if Trump decides to launch another White House run, spoke to the Westside Conservative Club in Urbandale, Iowa, on Wednesday, and the Dallas County GOP on Thursday.

Pompeo goes up with ad in Iowa and South Carolina

Former Secretary of State Mike Pompeo, who along with Haley, Cotton and former Vice President Mike Pence, has been a frequent visitor to the early voting presidential nominating states, stressed that the right to pray “anytime and anywhere is fundamental” in the inaugural ad by his political action committee.

The digital spot was launched on Monday as the conservative majority on the Supreme Court, in a major opinion, ruled that public school officials have a constitutional right to pray publicly and to lead students in prayer during school events.

And the ad sparked more speculation about the likelihood that Pompeo, a Fox News contributor, will launch a 2024 White House run, as the spot is running in Iowa and South Carolina, which votes third in the GOP presidential nominating calendar. Social conservatives play an outsized role in Republican Party politics in both states.

“They’re not just words. They’re not just actions. They are the things that make us. They lift us, inspire us, save us,” Pompeo says in the ad over visuals of people praying. “I’m Mike Pompeo, and this is who we are. Together, let’s make sure our religious freedom and our right to pray are never canceled.”

The ad is the first from Pompeo’s Champion American Values PAC, which the former congressman from Kansas, who served as CIA director and America’s top diplomat in the Trump administration, set up last year as a vehicle to help him travel the country in support of fellow Republicans running in November’s midterm elections.

A source in Pompeo’s political orbit told Fox News to expect more ads from the committee.

Paul Steinhauser is a politics reporter based in New Hampshire.